I can’t believe Christmas is nearly upon us and we are almost at the end of 2016. Now is the perfect time to look ahead and predict the biggest social media trends for 2017. This year I have seen huge developments across all social media platforms, with the biggest ever urgency to innovate and enhance user experience. Mobile is continuing to dominate with over 1 billion mobile-only users on Facebook and live video is quickly becoming the go-to medium. Has there ever been a better time to be involved in social media?

What social media trends can we expect from 2017?

Social media is converging. The acquisition of LinkedIn by Microsoft was completed only a matter of days ago for a cool $26 billion, Facebook currently owns Whatsapp, Instagram and Oculus VR, with Google owning YouTube to name a few. Twitter have laid off 10% of their staff and sadly shut down Vine. Is there a potential buy-out on the horizon in 2017?

Planning your social media for 2018? Don't miss any key dates, download our free social media calendar to make sure you're on top of trending events.

Live video seems to create a big buzz across a lot of the largest social media platforms for 2017 and I think several of them will be heavily pushing this over the next 12 months. Instagram is now in direct competition for short clips with Snapchat through their Stories feature, Facebook Live has exploded, doubling the amount of videos posted in the last year. Video posts not only reach more people (135% more reach than image only posts) they are more engaging (live viewers watch for 3 times longer) and provide greater interaction (10 times the comments of recorded video), so expect this to continue to grow next year.

Virtual reality is going to erupt

From recent acquisitions and new feature releases, it is very clear that social media is gearing up to offer more virtual reality. Google recently acquired Eyefluence - a start-up focused on eye-tracking - a very important technology to future virtual reality headsets. Facebook 360 was introduced back in June, which enables users to create complete 360-degree photos and videos, allowing viewers to explore and discover new places and experiences from their device. Facebook are also releasing 360 for Facebook Live in the next couple of months - another step toward their virtual reality vision.

Following the huge success of Pokemon Go, I think we will see similar games emerging in 2017, but with more of a social spin. We will also see monetization opportunities for companies to pay to place Pokemon (for example) in their stores to attract customers. So, local + social + gamification will be a big thing in 2017.

It is so important for brands to be visible on social media and offer the best levels of customer service and this is taking a whole new dimension with machine learning. Facebook recently introduced bots for Facebook Messenger, allowing companies to automate interactions with their customers.

I experienced this myself through ordering a Christmas present and getting all the confirmation and delivery details through Facebook! Twitter acquired Magic Pony Technology back in June 2016 - a London based company which has developed highly advanced machine learning so expect more artificial intelligence in 2017. Did someone say Terminator? 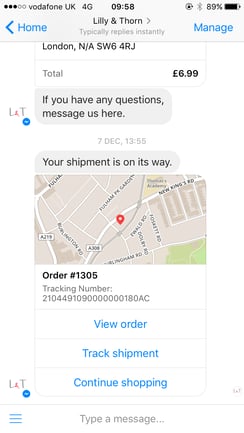 How are we planning to meet these social media trends?

At Sendible we are always innovating to make sure we are ahead in a constantly evolving industry. What can you expect from us in 2017? We have had a very busy 2016 and we have some huge big product releases planned for 2017, but you will have to wait and see.