But it's not all fun and games as people on social media are not as forgiving as brands would like and they fail to see the humor, so honest mistakes sometimes send brands spiraling down the reputation ladder. Today, we look at 3 brand flops in 2015, hoping businesses don't commit similar mistakes in 2016.

The sensitive netizens (users of the Internet) labeled their tweets as bad taste and too close to body shaming. In their bid to garner the attention of millennials and the younger crowd, IHOP alienated a lot of their other older customers with this type of tweets. 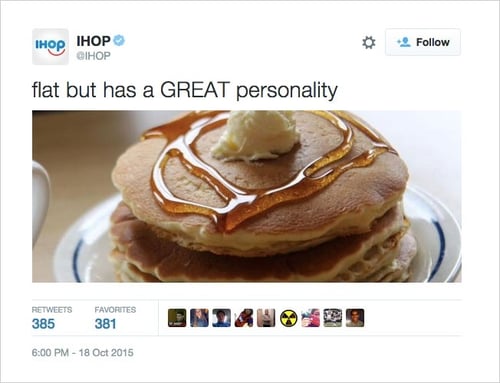 The case of IHOP proves that it' is difficult to be politically correct on social media. While some people defended the campaign saying America is the land of the offended and the posts were funny and completely harmless, some continued slamming the chain for their antiquated views on women. 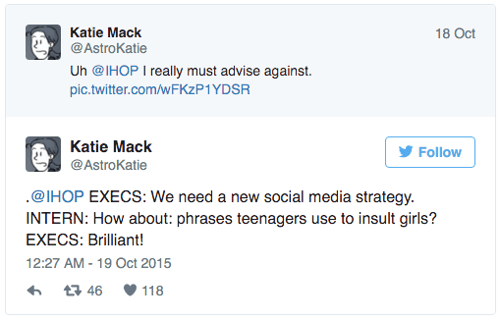 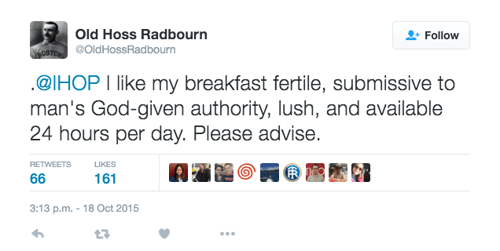 Lesson learned: Don't use insensitive, body shaming jokes on social media that can only be comfortably exchanged in a gym’s locker room.

When Vanity Fair published an article called Tinder and the Dawn of the “Dating Apocalypse”, there was an apocalypse in the Tinder’s Twitter account too. Understandably, Tinder got upset with the author of the article and directed many tweets to Vanity Fair as well as Nancy Jo Sales. However, it did not end there. 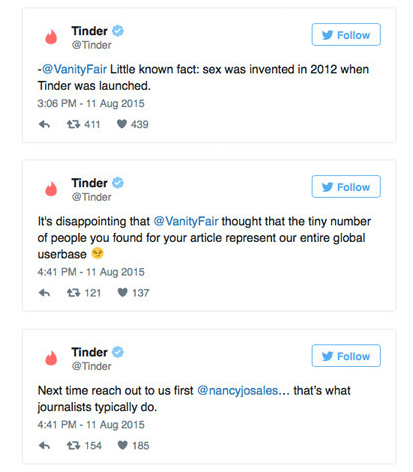 In an open letter to Sean Rad co-founder of the dating application Tinder), Nancy Jo Sales revealed a lot of other disturbing things. These included Sean making misogynist comments during the interview with Evening Standard, doing background research on Nancy and making a veiled threat saying he “had some inside information that would not reflect kindly on her as an author.”

Lesson learned: Reacting to bad press in an inflammatory way can only tarnish your own reputation. Most importantly, you should not make veiled threats or try to ruin a person’s reputability publicly, like ever.

3. Not Proofreading Your Tweets

This might be the most common error of all, made by brands and individuals alike. Nowadays, it is quite common to use some form of social media automation that helps to, at the very least, schedule posts in advance, which is all good as long as posts are proofread, right? 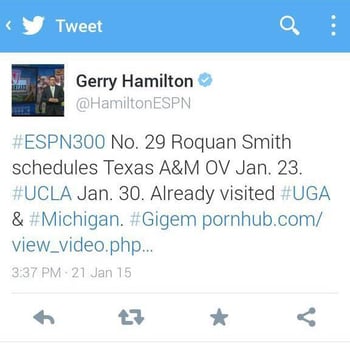 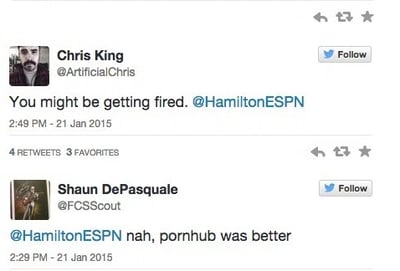 It was an honest mistake and to be fair, Hamilton deleted the tweet within minutes. But we all know how useless that can be, as one user simply took a screenshot and soon the tweeted image got viral.

Lesson learned: Slow down and proofread your tweets as well as other updates before you hit the post button. Typos might not be your only worry, check images and website links too.

So what can we learn from these social media fails?

From link catastrophes to insensitive posts, many mistakes were made on social media in 2015, and they all cost brands their hard-earned reputation. However, one can always learn from mistakes of others, and you too can avoid these types of goof-ups on social media by learning about etiquette and best practices for each network.

It always helps to proofread your posts, whether they have been scheduled in advance or you are writing them on the go. Those extra seconds will definitely pay off in the long run.

Scheduling aside, also remember to check your automated messages if you have any set up (you most likely do - think auto-replies on Twitter or your subscription confirmation email). There are at least 5 common marketing automation mistakes that each marketer has made at least once, so make sure you are not making them today.