Ever since social media came into being and gave us a brand new and altogether different and enhanced experience through which we can share and discover new things about life, there has been a quest to bring together the online and offline world and experiences.

We see examples in the trifolds sitting on our tables in restaurants or stickers in windows asking patrons to "Like us on Facebook!". The fact is that real people live in the real world, regardless of how much time we spend hunched over staring into our smartphone screens. Social media and real-world interactions can exist simultaneously and separate, but that really defeats the purpose of having the online experience. They need to be connected to make the biggest impact, both socially and financially.

The most likely entrant into this quest in the last couple of years has been quietly biding its time until widespread adoption lifts it onto the shoulders of the collective producer/consumer world and shows it to be the answer we've been waiting for. That solution is known as a beacon, and the biggest player in the space to date has been Apple's iBeacon technology.

A beacon is hardware rather than software, and uses bluetooth technology instead of the internet for its interactions. On the surface this seems like a step backward. The battle cry of technology has been telling us to move more and more online, but we can't escape the reality that flesh-and-blood human beings will always reside in the physical world (at least until some "lawnmower man" advance moves our consciousness into a collective on some server and heralds the end of mankind as we know it. Matrix, anyone?).

The beacon technology promises to finally bridge the gap between the online and offline worlds, for businesses at least. But the possibilities extend far beyond retail (although it's the most obvious and possibly largest benefactor from implementation). Beacons can be used for purchase feedback, sharing discoveries, even home automation internet-of-things implementations like telling you when the refrigerator needs restocking or turning the lights on when you enter a room.

The most obvious use of beacons is in retail. Shoppers in a retail store could be pushed coupons, new product information, or any variety of notifications that might enhance their shopping experience as well as give retailers more information, more sales, and more online exposure through shares. Just as when you purchase something on Amazon currently, shoppers could receive a notification to share their purchase on social media after checkout. Likewise, they could be sent feedback forms or surveys to gather information. 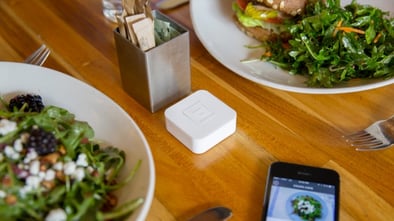 Today, buyers are encouraged to rate their experience on sites like Yelp. That requires extra work on their part, but beacon experience could remove that barrier, or layer of friction, by pushing a notification that would only require them to click a button or possibly add some quick text. At worst it would allow a link to a review site to pop up, still saving the consumer time.

The biggest pro for beacons comes in the price point (once you move past the fact that it is an almost real-world and real-time interaction). Even though they haven't been widely implemented yet, beacons were praised for their low price points as early as two years ago, meaning that those price points have and likely will drop even more in the future.

The con side comes in the same form that beacons seek to overcome, which is simplicity. Despite removing some barriers to whatever process they seek to enhance for businesses and consumers, users still need to turn on their bluetooth, accept permissions for location services, and opt-in to receive the notifications. This is the next barrier to cross, for once that is accomplished the entire process becomes what it is meant to be: a simple and user-friendly way to get and give feedback, get deals, share experiences, or whatever else a company adapts them for.

While Apple jumped ahead in the technology, they certainly aren't the only players looking to take advantage of it. Paypal and Qualcomm are both developing beacon hardware, along with a field of lesser known names in tech. What started with Foursquare - bridging the online and offline worlds with apps and internet connectivity - could very well be realized fully with beacons. As soon as a handful of major retailers decide to jump in head-first, you can be sure that the next evolution in social business will be well underway.