Does the Trump Card Always Work on Social Media?

Editor’s notes: The author, Sendible’s Partnership Manager Luke, presented a talk on this subject at brightonSEO, one of the top industry events in the UK. You can find the slides for the original presentation below.

We’re living in a world full of noise and commotion, a reality that is made particularly evident on social media networks. Influencers have become an essential part of social media strategies, important news is being diluted while fake news is amplified and social media is a more competitive space than ever. With such a vast amount of data readily available for us to access and utilize, how do businesses stay focused? How can we use this data to our advantage and enable our brands to impact target audiences? Enter: The Trump card.

With such a vast amount of data readily available for us to access and utilize, how do businesses stay focused? How can we use this data to our advantage and enable our brands to impact target audiences? Enter: The Trump card.

What is the Trump card?

In card games, the trump card is one which outranks all cards of plain (non-trump) suits. In everyday life, the phrase refers to a situation where one thing automatically prevails over all others. Once the trump card comes into play, everyone else loses. In business, prevailing over your competition is a major goal and something to strive towards.

In a presidential election, it’s no different. Social media is a tool that is used to tackle competition, no matter if you’re a small agency or Donald Trump himself. Now, U.S. President Donald Trump is the master of using his trump card on social media. A mega influencer in his own right, Trump can (and often does) cause large disruption with a single social media post. He knocked $5.2 Billion off Amazon’s valuation with this one outspoken tweet, and we all know there’s more where that came from.

Amazon is doing great damage to tax paying retailers. Towns, cities and states throughout the U.S. are being hurt - many jobs being lost!

That is the power of influence. Social media, as a whole, holds its own power. Over 1.32 billion people log onto Facebook daily. There are 500 million tweets sent per day, 95 million photos and shared on Instagram every single day (source: SocialPilot) and, in the midst of this content overload, it is difficult to pay attention to any given thing. It’s time for us to rethink how we play our own trump card.

How to play your Trump card

Using Trump’s strategy can benefit your organization if you play your cards right. We can learn a lot of lessons, both positive and negative, from Donald Trump's powerful social media presence during his presidential campaign by the way he used his influence, data and consumer perception to emerge with a win.

President Trump is an influencer himself, but not many of us are in a position like his. In order to make this work for your brand, find and utilize influencers within your niche market. By collaborating, you gain direct access to a captivated audience that already has trust and a connection with the influencer. Following in suit of influencers, there is a rise in consumers taking to social media in mass amounts to share their experiences and feedback with brands, and over 90% of consumers seek out online reviews. This large quantity of readily available data about brands means that social networks are becoming more integrated with consumer’s research before making a purchase.

Consumers are doing their research, reading reviews, speaking to their friends and listening to influencers. With Trump’s public appearances, shock tactics and clever use of trending news and hashtags on social media, he received an estimated $5 billion worth of earned (free) media coverage. Being a person of influence is certainly beneficial, especially when trying to attract the attention of an audience. But making them listen to your message and the message of the brand is half the battle.

Dig into the data

Data is everything. Using numbers to your advantage when preparing a social media strategy or new campaign could spark a huge difference in achieving your objectives or falling short. It made a world of difference for Donald Trump - data was a huge, or shall we say ‘yuge’, piece of his overall trump card. Let’s dig in.

Early on, the Trump team collaborated with a company called Cambridge Analytics to launch Project Alamo, a custom database of 220 million people with an extraordinary 4,000 to 5,000 data points for each person. The data points included Facebook activity, ethnic affinity, location, social dynamics, credit rating, just to name a few, which the team then used to tailor their marketing message with ultimate precision. This took segmentation to a new level, using data as a key driving point and Facebook as the platform of choice to target valuable potential voters. 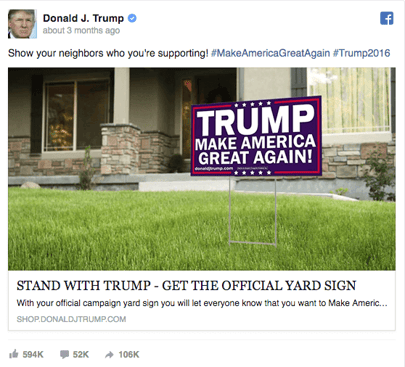 Trump took this ginormous campaign to new heights by uploading this database to Facebook's custom audiences advertising feature, and using targeting options to create a Lookalike audience which replicated and scaled the audience they wanted to target with tailored messages. Impressive.

Team Trump pumped millions of dollars into Facebook and Instagram Ads, using a breathtaking 40,000 - 50,000 variants of social media adverts at any given time. They called this ‘A/B testing on steroids’ as they tried a wide range of advert variations, from videos (with and without subtitles), images, gifs, collages, text/quotes overlaying photos. You name it, they tested it. These targeted social media posts and ads linked to over 100,000 Trump related campaign websites tailored to each message and target persona. It gets deeper. The intelligence that Team Trump gathered from this social media campaign gave them the geographical locations of the most persuasive and influential target audience for voters. No surprise, their core target audience was ‘disgruntled Americans’ who sought change and did not connect with Hillary Clinton’s celebrity influencer backed campaigns.

It gets even more impressive. The intelligence that Team Trump gathered from this social media campaign gave them the geographical locations of the most persuasive and influential target audience for voters. No surprise, their core target audience was ‘disgruntled Americans’ who sought change and did not connect with Hillary Clinton’s celebrity influencer backed campaigns.

That’s why we won. We knew just the voters we needed to turn out and we turned them out in big numbers. - Trump’s digital ad executive, Brad Parscale (Source: San Antonio Express)

This data directly impacted the planning of Trump’s campaign appearances, where he rallied supporters in key areas to win votes.

You probably don’t have the resources to spend $150 million on Facebook Ads, but it’s the idea that counts here. Set up your goals and establish your audience. Use the resources you do have to implement a data-driven campaign that is certain to reach the scope of that audience and drive the results you’re looking for. 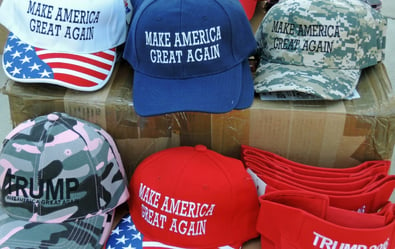 For businesses, knowing your customer is key. Understanding their likes and dislikes should position your brand’s tone to resonate in a positive and influential way with them. This drives loyalty, and loyalty drives return. For Donald Trump, knowing his ‘customer’ resulted in a win. Donald Trump isn’t the first or the last to capitalize on customer insights. During and after his campaign, in fact, countless brands used the feeling of uncertainty in the current social climate as an opportunity to connect with their audience. Here are two brands that tried to implement this tactic, but only one of them succeeded.

Beer brand Heineken launched their ‘Open Your World’ campaign video on YouTube in Spring 2017, after Trump’s election and during a time when the media was populated with negativity and division. This captivating clip brought pairs of strangers together with divided beliefs, opposed political and social world-views. These strangers were placed in situations where they had to work through their differences towards a common goal. Needless to say, the video went viral, garnishing 14 million views and 97% positive feedback.

Beauty brand Dove launched a ‘body-positive packaging campaign’ with similar intentions, but a completely different result. In this campaign, Dove produced limited-edition body wash packaging presenting diverse representations of female bodies. It was meant to connect the brand to women of all shapes and sizes and celebrate diversity, but instead, there was a huge amount of negative feedback from the public, especially on Twitter. People thought the campaign gave a segregated view of these different body types and not one that focused on unity like we see in Heineken’s video.

Get closer than ever to your customers. So close that you tell them what they need well before they realize it themselves. - Steve Jobs

You need to know your customer inside and out so that you can speak to your mutual interests and convey continual alignment. A slip up here could cost you essential ‘voters’.

We have a lot to learn from showing your best foot forward, and Donald Trump's campaign was undeniably powerful. He didn’t necessarily possess the upper hand, and he implemented key forces to influence a huge amount of people and secure a positive result. As a company, why wouldn’t you want to follow in those footsteps (maybe without the negative implications and opinions)?

Build a network of quality influencers that are deeply in line with your brand. Develop campaigns using these powerful influencer relationships to achieve goals. Utilize social media to tell a story of your brand, a story that your customers can relate with and stand behind. Know what works for them, and give them what they want! Lastly, don’t skimp out on the data when creating a campaign. Spend time looking at audience insights. Utilize your resources. Create a plan of attack. Love him or hate him, the Trump card can work for you!

Do you have any examples of influencer campaigns, data-driven wins and customer insights working for you? Drop us some feedback in the comments below.

Want the slides from my keynote presentation at brightonSEO? View or download them here. 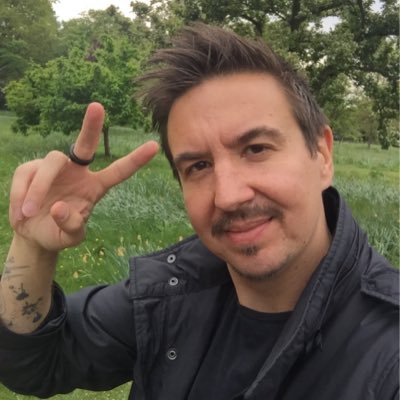 I’ve worked in marketing roles within the technology industry for over 10 years. In my spare time, I enjoy travelling, socialising, watching live music, exploring London and attempting to hit the gym.

Next story Snapchat Marketing: 7 Content Ideas to Stand out as a Brand
Previous story 6 Digital Marketing Blogs You Should Read Every Day