How Will Voice Search Change the Social Media Landscape?

Voice search is growing at rapid rates. This growth is facilitating a change in marketing for brands, but what about social media? Current emerging voice search trends are impacting how people use it, and quite soon, they may move onto social.

Did you know that in 55 percent of teens and 41 percent of adults were using voice search in 2014? 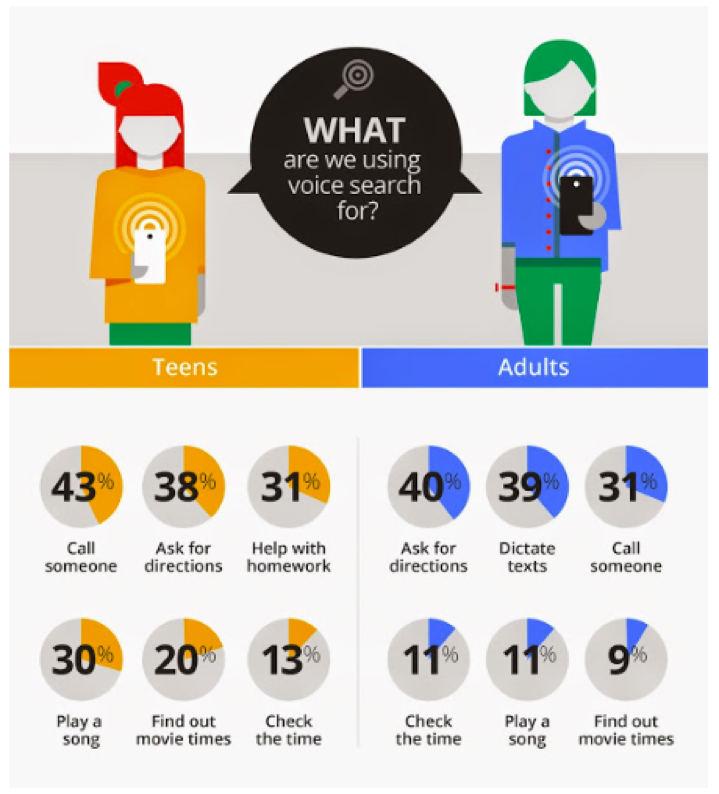 That was three years ago, and usage has grown since then. Voice search may be new to most, but Google estimates that 20 to 25 percent of all mobile queries are voice search, according to Search Engine Land.

The cross-platform measurement company, comScore estimates that 50 percent of all searches will be voice by 2020. It seems that the willingness to use voice search rather than typing queries with text is on the rise.

The growth and development of innovative technologies is one factor. People using voice search seem to be more comfortable using it, especially when alone, according to findings by StoneTemple. 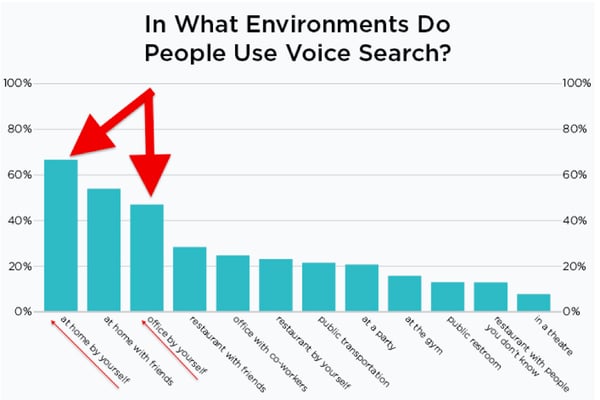 Even though people are more reluctant to use voice commands in public, it’s quite often used at home with friends or in public places where you don’t look like you’re talking to yourself.

It also seems that age is a factor as well. “There is a definite tendency for those under 24 to use voice commands quite a bit more than the other age groups (51.6% vs. 38.6% for all respondents)”, the same survey by Stone Temple found. 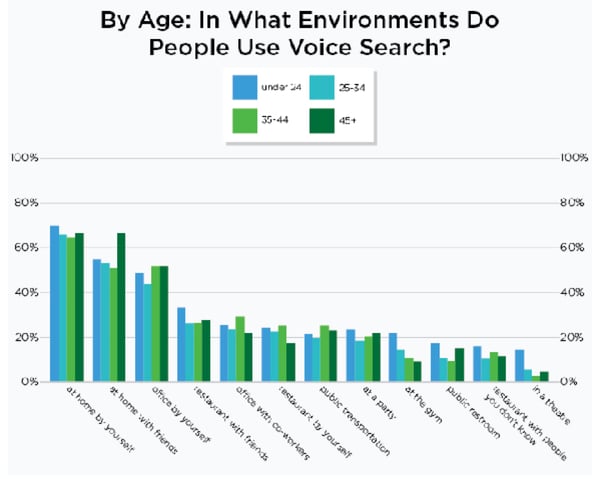 There are three major factors impacting the mobile experience right now; the growth of mobile technology, voice search, and artificial intelligence (AI). Many companies are going mobile, and when they need to access files, apps, and emails quickly, AI bots are answering those voice commands.

This has certainly caused a rush to AI adoption on messaging platforms like Facebook Messenger for brands in nearly every industry. It would seem that one fuels the other in this triangle of tech innovation as they all mature together.

What does this have to do with changes in social media?

Well, not a lot yet. There is a small percentage of people using voice search and commands to interact with friends and family on their social media profiles. 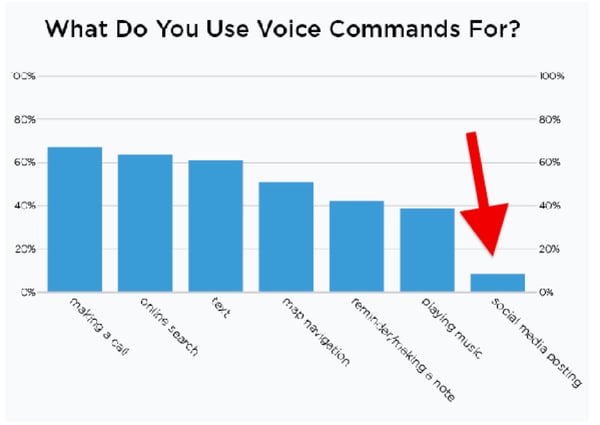 However, this percentage will rise as this search method continues to develop. There is a possibility that we’ll be able to access nearly any application via mobile devices by simply talking to them. The advancement in AI bot technology will allow accents and natural speech to be understood better as well which will break down the language barrier.

There has been some development in pairing voice search and social media networks. Facebook has already rolled out voice messaging options on Messenger, and Android Auto also allows users to listen to, and reply to messages via voice. As one social media platform adopts the use of voice, the likes of Twitter, Pinterest, Instagram, and YouTube will follow.

Personal assistants, on the other hand, could help bridge the gap between human and social networks. You know who Siri is, right? 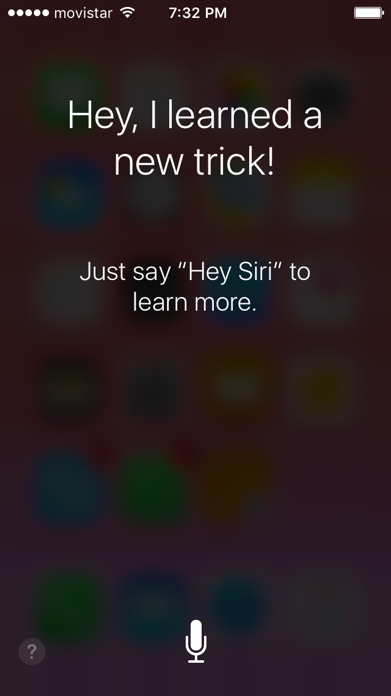 Next, we saw Cortana, Google Assistant, Alexa, and others will surely be launched by other companies in the future. Voice commands for social will likely follow this pattern as well.

In fact, as the understanding of natural human speech becomes more advanced, we’re getting closer to a time when the conversation between user and device is seamless.

This would suggest that digital assistants are of great importance for the future. Interestingly, this is the same age demographic that uses social media platforms the most and according to, PEW Research Center, the 18-29-year-olds are closely followed by the 30-49-year-olds with whom the use of personal assistants is also quite popular. 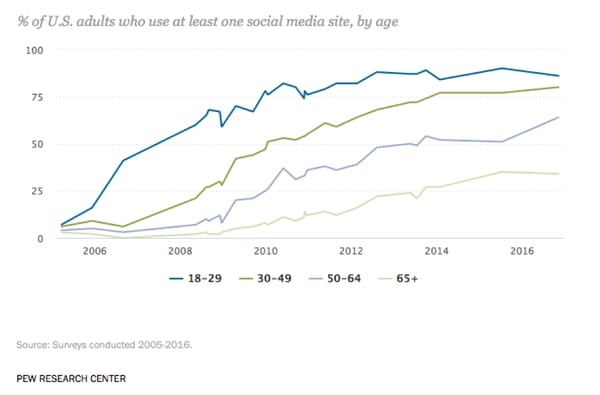 Siri, iPhone’s gentle voice assistant is one way you can access your social apps and messaging platforms to text and call via voice.

For example, you can ask Siri to send a message on WhatsApp and also receive calls and messages using voice too. It’s certainly a hands-free way to get your messages out to friends. 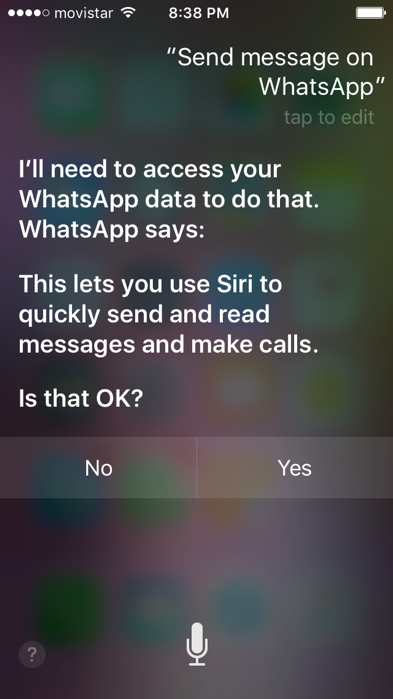 Once you confirm, Siri will send your tweet or post. There are limitations to this feature, however, like not being able to add images or videos to posts and not being able to choose which account you’d like to send the message from (this needs to be selected in the app prior). But it’s definitely a step forward to creating a world where keeping in touch has never been easier.

You can also use Siri to search for people/brands on Twitter or relevant tweets. This can be quite handful if you’re a user and want to tweet your positive feedback to a company or ask a quick question. 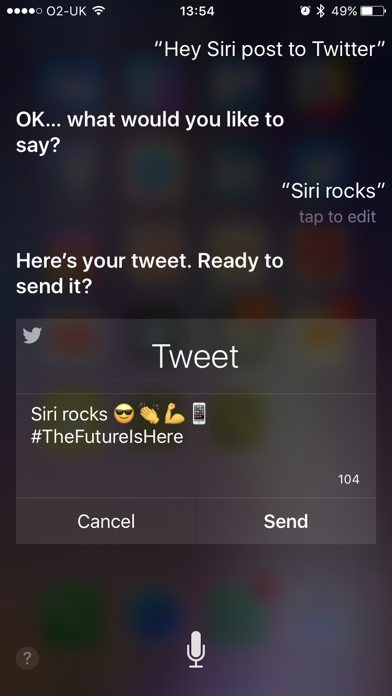 Facebook is attempting to go one step further when it comes to voice search accuracy. The company’s new Messenger assistant M may be the next generation conversational AI bot. 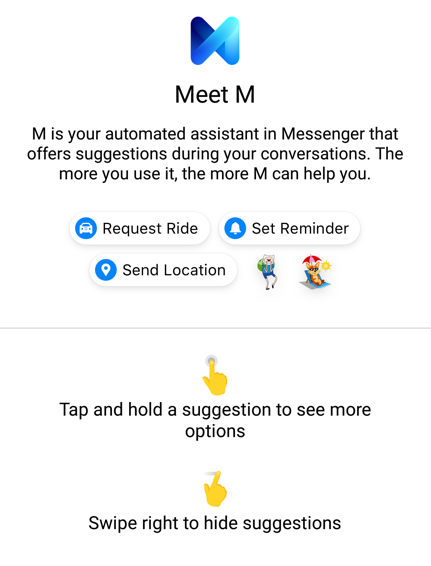 Sadly, however, Facebook is hesitant to bring M to market. They want it to be perfect to ensure that it surpasses the capabilities of Cortana and Siri. This is wise, as it may become the driving force for using voice search in social media.

In the meantime, there are a lot of developments with chatbots and AI that Facebook has brought forward, allowing users to communicate with brands and make purchases without involving real human beings.

There are also a few startup players in the voice/social space, helping users interact with their social media accounts in exciting, innovative ways.

What is the future of voice search?

Predicting the next step for voice search is difficult, especially when it comes to social media. The boom of AI tech, and how it’s refining user experience, certainly makes mobile to human conversations more accessible and accurate.

Voice search is often used to answer questions and as the amount of question-based queries grow, so will the capabilities of the technology. 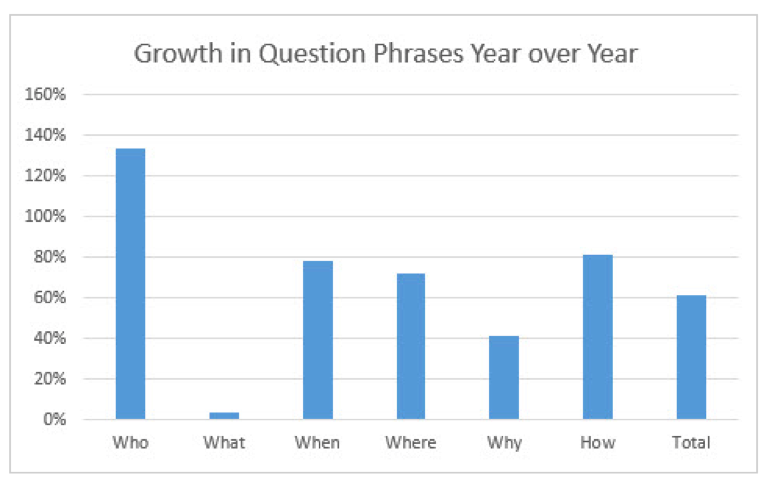 Voice capabilities we may see in the not so distant future for social media could include:

If you keep your ear to the ground and your thumb on the pulse of new tech trends and marketing trends, you’re already seeing the shift toward voice optimization and AI technology. Voice search is in many ways still in its infancy, youthful, and emerging. The big question is, how will it mature? What will a completely hands-free social network look like in 2020 and where will this technology take us?

Marcela De Vivo Bustillo
Marcela De Vivo is a search veteran who has been in the industry since 1999. Marcela draws on an deep expertise in both organic and paid search to help companies large and small increase their revenue from digital marketing. Her emphasis has been in creating integrated marketing strategies that include paid, organic, social, and PR to build authoritative domains that have strong visibility across a variety of channels

How Subtitles and Captions Help Increase Video Views by 80%