How to Build an Influencer Marketing Campaign on Twitter

It’s tough to filter through the noise on a popular social media platform like Twitter. There are roughly 500 million tweets sent each day, so even when you are actively promoting content, it can easily go unnoticed by your target audience.

The overall performance and ROI of promoted content on Twitter often falls short of digital marketers’ expectations. It makes sense then that strategies involving influencers have become increasingly popular in order to help brands stand out and reach more of their target audience.

What is Influencer Marketing?

Influencer marketing involves a collaboration between brands and a select number of experts in a relevant field who have a large following on social media. Influencer marketing distinguishes individuals who have significant regard for a group potential customers. When the right influencers endorse your product or brand, it can create a huge impact!

The way audiences interact with content continues to shift, making influencer marketing an even smarter route. Millennials purchase based on endorsements, reviews and ultimately trust. They view authenticity as one of the most, if not the most, important elements of purchasing. For example, 33% of millennials read blogs and expert reviews before buying a product, so it makes sense for brands to showcase these expert opinions.

How to start an influencer marketing campaign

1. Identify influencers related to your industry

To start, you should identify relevant influencers who are associated with your domain and industry. If you run a fashion brand, for instance, your target audience and the influencers’ followers should be mutually inclusive. As a fashion brand, you would be better off reaching out to fashion bloggers and beauty experts rather than digital marketers or travel enthusiasts to promote your product. 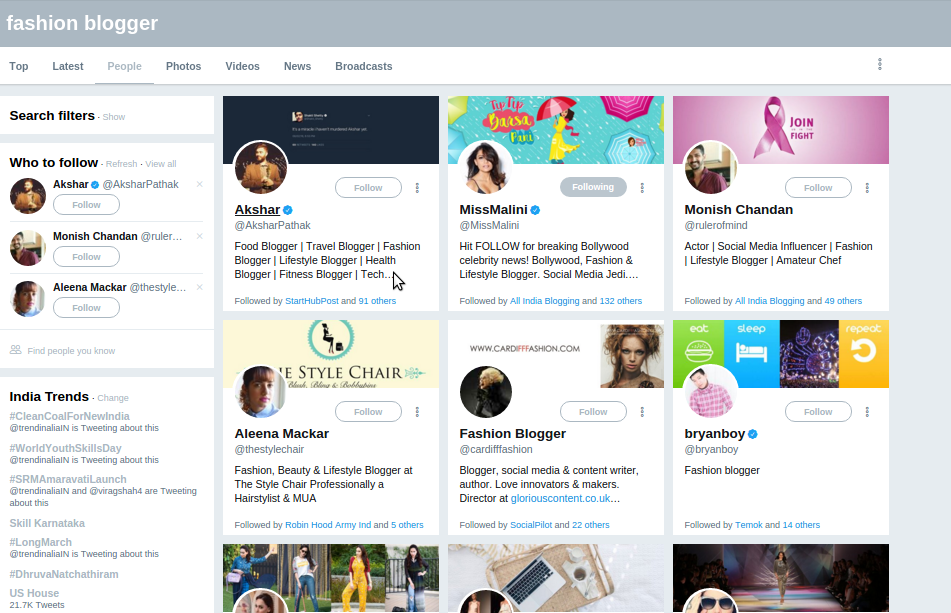 If you are already aware of influencers that use your products, start there. Think of people similar to them and individuals that are respected by your target market. Engage with relevant hashtags on Twitter to see who’s talking about your brand, or similar brands. You can use Twitter Advanced Search to meticulously comb through Twitter (although it can get time-consuming). There are also third-party tools, such as Twitter monitoring through Sendible, which allow you to keep an eye on certain hashtags, mentions and conversations pertaining to your brand.

After identifying a number of leading influencers, reach out! Rather than sending a cold email with your interest, go the extra mile by engaging and showcasing the fact that you have mutual interests.

Take time to source valuable influencers and cultivate a professional relationship. When trust has been established and you’re confident that there is a mutual fit, you’re in a great position to launch an influencer marketing campaign. Too often, brand managers begin talking about business before building a rapport. Content marketing mogul (and influencer in her own right) Ann Handley strongly warns against bringing business into the game too quickly. 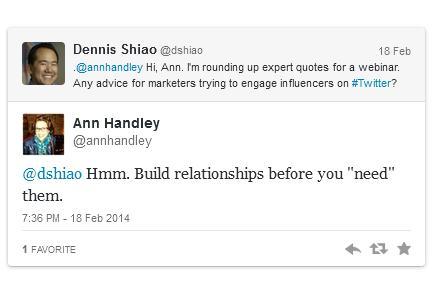 She’s absolutely right. Before merging influencers into a campaign, make sure that trust is there. There should be an excellent foundation of trust and rapport before it ever moves beyond that.

3. Devise a marketing strategy according to the intention behind your campaign

From creating brand awareness to boosting sales, influencer marketing on Twitter has the potential to drive amazing results.

Keep these things in mind before creating an influencer marketing campaign:

Going through this process will help clearly define what you want to get out of an upcoming campaign and ensure that you are able to meet those goals.

After developing a clear strategy in relation to the influencers you are going to work with, start implementing your campaign.

Have the content for your campaign ready and prepare the tools your influencer needs to succeed (i.e. style guidelines, deadlines, etc...) prior to the campaign launch. Furthermore, I would strongly recommend complying with the Federal Trade Commission’s endorsement guidelines before starting a campaign.

Influencers have the power to rapidly increase your brand awareness because they have an established and engaged audience. A great way to utilize influencers is by asking them to send content related to your brand/product, especially if it includes an eye-catching video or GIF to promote it.

Oreo collaborated with various influencers, namely basketball superstar Shaquille O’Neal, while running their #OreoDunkSweepstakes campaign in Spring 2017. Oreo invited fans to show off their dunking skills by using the hashtag #Oreodunksweepstakes for a chance to win a VIP experience with Shaq. Shaq's endorsement and participation encouraged people to challenge him, and worked to heighten the reach of the campaign.

HBD to me, and to @Oreo Cookies! Now watch me drop the mic, then throw down a dunk for the #OreoDunkChallenge. #ad pic.twitter.com/yUDU3dIK2L

Looking to rapidly increase app downloads? Create an incentive for users to download by teaming up with an influencer.

In early 2017, LG Electronics partnered with app development company Smule to run a dedicated contest with pop-superstar Nick Jonas. Users were prompted to download the ‘Sing! Karaoke’ app in order to sing a duet with Nick. Even more enticing were the over $5,000 worth of LG products and a chance to meet Nick Jonas that were up for grabs!

#SingWithLG & me. Record our duet on @smule to win @LGUSAMobile prizes + 1 grand prize winner gets to meet me: https://t.co/957fdos86u #Ad pic.twitter.com/6pa4MNJnNs

A fairly simple way to implement influencers into your marketing plans is to partner with them to share your brand’s blogs, features, products etc... This tactic can work to generate more leads and drive website traffic with very minimal planning.

Beware of framing this as a bland promotional technique! Instead of giving influencers strict instructions regarding the content they need to post, let them personalize it a little. Reliance Jio is a mobile network in India whose Twitter presence was massive when they first launched. What started out positively ended up being a huge failure because several prominent influencers sent the exact same tweet in regard to Jio’s launch. It backfired on the brand’s image, but also made people question the authenticity of the influencers involved. 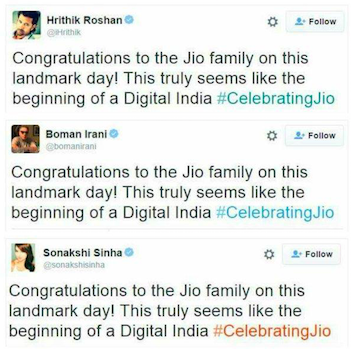 Be flexible and allow influencers to come up with unique and engaging content that they know will resonate with their audiences. You don’t need to be @mentioned on Twitter for it to have a positive effect! As long as influencers are able to get the message out, it’s a win.

It is evident that Boomerang, which is a cartoon streaming service for kids, took this approach when getting in touch with parent-bloggers to promote their new streaming service. Each influencer commented on what drew them into the service, which is something that their audiences can connect with.

#ad Now families can share all of their favorite cartoons like #TomAndJerry with #Boomerang streaming service --> https://t.co/uovGRxEKtt pic.twitter.com/jdFmRLWDws

Did you know that #Boomerang has a new streaming service that parents and kids can share the cartoon experience? #ad https://t.co/NZPMGNbKwu pic.twitter.com/53GLhIEOGO

It is important to quantify the overall reach and impression of your content. Use these numbers to calculate the ROI of your campaign on the basis of different parameters such as products sold and followers gained.

Use the keywords and anchor hashtag from the campaign to track its overall reach and performance. A Twitter monitoring/social listening tool will be useful here as well, as you can do individual analysis, check the retweet count, calculate impressions/reach and gauge other data-oriented results. Not only will it help you judge the overall efficiency of your present campaign, but it will also let you identify leading influencers for your next campaign.

Getting started with influencer marketing can be as simple as finding the right people, creating a solid plan of action and running with it.

Hopefully, you’re starting to get an idea of which influencers you want to contact, or what kind of campaign you want to create! Share your thoughts with us in the comments below and let us know if you have any questions about how to make influencer marketing work for you.

Pankaj Narang
A social media marketing enthusiast, Pankaj is determined to shape his ideas into perfect products. Co-founder of Socialert, he believes in coming up with engaging tools to redefine the face of digital marketing. Learn more about him on his blog.