Social media marketing (SMM) is one of the best ways to reach your fans. Real time sharing and the ability to ride your consumers’ emotional waves provide a marketing opportunity that can’t be competed with. Facebook provides businesses and nonprofits with some of the deepest insights available. If you can use emotional triggers in your posts, based on what your target group is already communicating, you will find that your SMM campaigns become hugely successful.

Aligning with the Consumer’s Emotional Moment

Right now, it’s college football season. Sports fans are going through emotional highs and lows during games, contingent on their team winning or losing. Facebook brings people together to share their feelings on this. During NFL season 2013, the Facebook Data Science team tracked the emotional shares and graphed the average emotional experience based on time relative to kickoff. 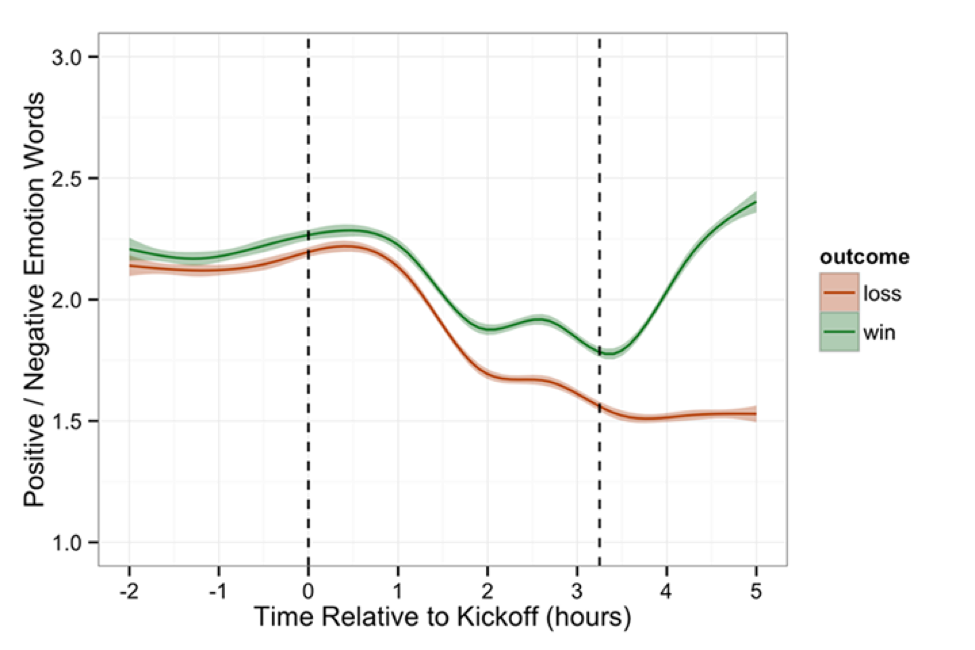 As you can see, the fans of the winning teams seemed to pique, emotionally, as their team won. Those rooting for the losing team posted status updates indicating that they felt much worse than when the game started. These are great examples of recorded emotional moments.

What this means for an SMM professional is that you can conduct or find Facebook research like this to align to your consumers’ emotional moment for targeted posting. If your market are sports fans, you may even be able to plan your posts around games based on the information above. The first step in using emotional triggers is charting the emotional hills and valleys of your customers and potential customers. You can use your findings to create a marketing calendar.

Adding to the Moment

Once you’ve aligned to the emotional moment, of your consumer, it’s time to add to it. For example, According to Gregory S. McNeal, one Facebook study suggests that women feel best about themselves on Thursdays and worst about themselves on Mondays. You can take this data, and create your posts to add to the emotional output of the average consumer. On a cosmetics ad posted on a Thursday, you can integrate a term like, “enhancing your inner beauty,” accompanied by an image of a woman looking stunning and confident. On a Monday, it might be better for you to post ads that focus on the contrast between a consumer with and without your product.

This Dermablend Ad is a Great Example of Adding to a Monday Moment:

The speaker in this video seems to feel very poor about herself without makeup. It is the perfect example of an advertisement that adds to the emotional moment of a woman when she feels bad about herself. This is how successful campaigns are designed.

Stimulating the User’s Senses with Visuals and Sounds

Video posts on Facebook, according to David Cohen, seem to generate significantly higher amounts of engagement. On average, videos received 2,183 interactions where photos averaged 1,358. By posting videos, you not only appeal to the visual senses of your fans, but audial as well. Videos are probably the best way to immerse viewers into a perceived experience. In SMM, the best way to appeal to people is through video ads. Photo ads are next in line.

If you really want to trigger emotions with your Facebook posts, integrate a new understanding into your approach. You must first align to the consumer’s emotional moment, then add to it with audial and visual stimulation. Hit strong and hard during the high highs and the low lows for the most impact. Start using this knowledge to update your current social media strategy today.